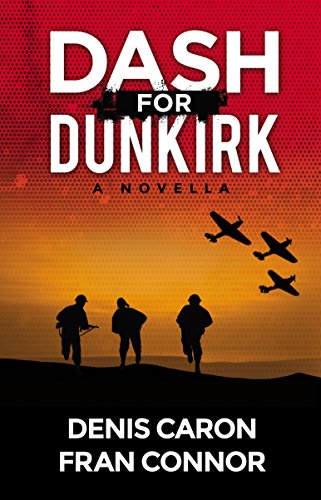 May 1940: Royal Air Force pilot Harry Fitzgerald is one of millions of heroic Allied troops fighting against Nazi Germany. In the pitched heat of battle over the skies of Northern France, Fitzgerald is shot down by an enemy plane and captured. Miraculously, he escapes certain death but must make his way back to the Allied evacuation at Dunkirk to get back home.

However, Fitzgerald is in the middle of a warzone. At a chateau turned hospital, he encounters two of his wounded comrades. Too sick to reach Dunkirk by themselves, they helplessly lie in wait as the German army advances. Fitzgerald knows he must save them, and with the assistance of the French nurse Solange, the refugees attempt to reach Dunkirk-before the Nazis can reach them. It’s a life-or-death mission through dangerous territory where nothing is guaranteed.

In Dash for Dunkirk, authors Denis Caron and Fran Connor explore a world where loyalty and bravery face off against an unforgiving enemy. Bound together by duty and honor, war heroes push themselves to the limit through refugee-crowded streets, mechanical setbacks and enemy attacks. Will they reach safe harbor, or will the ultimate evil finally prevail?

Readers of All Quiet on the Western Front and The Alice Network will enjoy this WW2 Historical Fiction Novella.